London, England – Cyberdog are excited to announce that the ‘Godmother of Japanese electronica’, Coppé, is booked to play an exclusive free live show inside their flagship store in Camden on Saturday 29th September.

“We are thrilled to be hosting Coppé here,” said store manager Izzi. “We are huge fans of her and we are expecting a large turnout.”

After studying piano from the age of just three, Coppé became a well known radio and TV personality in Japan at a young age. She continued to write and perform her own music, and in 1995 she self-released her debut CD which was followed by many more successful albums. Her music includes many influences but is mostly electronic and club oriented. She has performed worldwide and collaborated with a wide range of musicians including Plaid, Q-Bert, DJ Vadim, Senior Coconut, Tipsy, members of Skinny Puppy, Takemura Nobukazu, DJ Kensei, Fred moTh, Hifana and Jemapur amongst others.

Cyberdog began twenty-one years ago in Camden Town, London. It has since opened stores in Brighton, Manchester and Ibiza, as well as an online store at http://www.cyberdog.net. It had a leading role in creating the ‘cyber culture’ of today and is now establishing itself amongst the various urban scenes worldwide while striving to stay a step ahead in the evolution of fashion. 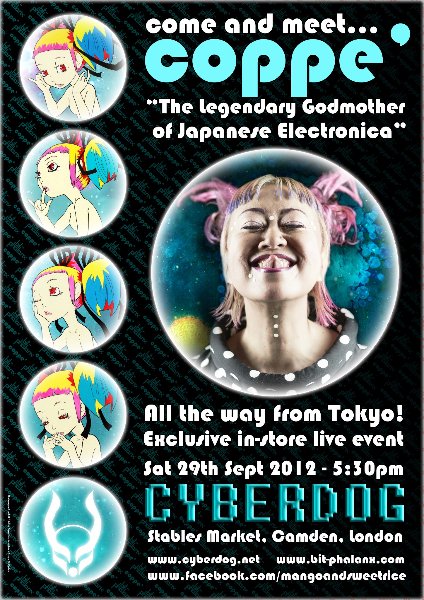